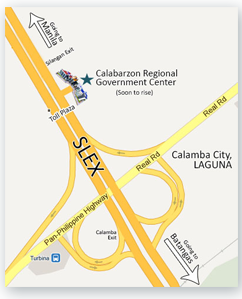 This is a public-private partnership (PPP) program in support of the administration of President Benigno S. Aquino III. It is a joint venture agreement between Calamba City and MTD Philippines through a build-operate-transfer (BOT) scheme.

Construction of the P2.5-billion CALABARZON Regional Government Center (RGC) in a 3-hectare area in Barangay Mapagong, Calamba City, Laguna has officially started after top officials of the investor in the project, MTD of Malaysia, visited the Philippines and witnessed the signing of the Joint Venture Agreement between Calamba City and MTD Philippines Inc. last Jan. 23, 2013. It was also witnessed by DTI Usec. and Director General of the Philippine Economic Zone Authority (PEZA), Dr. Lilia de Lima.


This BOT project fully supports President Aquino’s public-private partnership (PPP) program. It is the biggest so far at the local government level! More than 5,000 employees of some 50 National Government Agencies can be accommodated in this first-ever one-stop-shop RGC for Region IV-A in Calamba City, the birth place of our national hero, Dr. Jose Rizal.

The RGC in Calamba City, the most business-friendly component city in the Philippines for CY 2012, shall be the central hub of all activities for Region IV-A which consists of five Provinces, namely: Cavite, Laguna, Batangas, Rizal, andQuezon or CALABARZON - the most densely-populated Region in the Philippines, benefitting its more than 12.6 Million constituents and many others needing government services.

"The Meaning of True Development"